"Dirty gem"
In the streets and shopping malls of a Japanese city, an unstoppable man punches his way through anyone who stands up to him and fights. You too will be punched in the face! Out now on Blu-ray and DVD

There’s something about the act of one person punching another full in the face. Again. And again. And again. In real life perhaps you’d intervene to try and knock the person out, stand gawping or get away from the immediate area asap. Indeed, we see all these responses and more from characters in Destruction Babies, but the camera just keeps on filming the perpetrator of the punches. And the staged violence appears to be for real here, not faked.

Certainly there are other scenes which mediate the fist fighting via the editing process. And the scenario (it feels more like a scenario for actor improvisation than a full blown script) introduces a number of other characters in addition to punching man Taira Ashihara (Yuya Yagira), most importantly girl shoplifter Nana (Nana Komatsu) and cowardly boy Yuya Kitahara (Masaki Suda) who starts beating up girls in Taira’s immediate wake.

Then towards the end of the film the plot puts the three characters in a car, enacts a male against female episode of sexual violence in the back seat then later stages a full blown car crash. The sexual violence is an unremarkable if sadly all-too familiar narrative device while the car crash is over very quickly. However the face-punching just keeps on going which is part of what gives it such extraordinary power as an image: it lingers in the subconscious long after the film has finished screening. 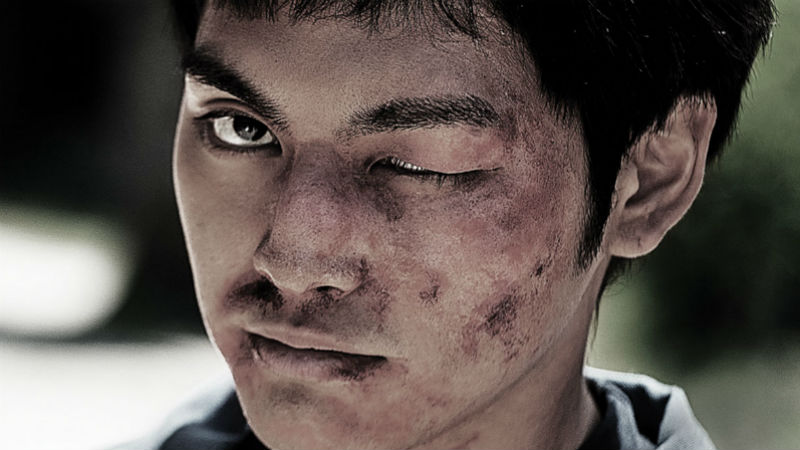 So Taira punches people. And punches them again. Until they run off or fall down, bloody faced and unconscious. Or until he falls down, bloody faced and unconscious. Only to later get up and start punching the same person’s face or another person’s face all over again, continuing the cycle. Why? What is wrong with him? The film never attempts to answer such questions, merely shows us Taira punching his way through much of the feature-length running screen time.

Is this movie a good thing? I’m not sure. It’s reminiscent of the DMovies poll as to whether or not it’s ok for movies to show real sex: you could ask the same question about movies showing real violence. What is true, however, is that it’ll stay with you for days afterwards, making you think about it over and over, just like Taira’s punches which keep on coming whatever happens. There’s no question but that the film demands to be seen.

Destruction Babies is out on DVD and Blu-ray in the UK on Monday, April 10th, and it was made available on iTunes in December (UK only).