"Filthy genius movie"
In his first film, Kleber Mendonca Filho explores the dull urban cacophony that ties together middle-class neighbours in the Brazilian city of Recife - on MUBI for 30 days only!

Subtle yet constant and unnerving sounds surround and tie together neighbours living in a high-rise middle-class suburban condominium in Recife, a large and developed city in the country’s Northeast. A dog barking incessantly, a hoover, a washing machine spinning, cars speeding past, fireworks, or simply neighbours and security staff engaging in painfully trivial and contrived dialogue punctuate the existence of the apparently peaceful community.

Unlike other Brazilian films such as City of God (Fernando Meirelles, 2002) and Elite Squad (José Padilha, 2007), Mendonça Filho chose not to denounce violence and corruption in a graphic and tantalising manner. There are no armed gun fighting, car chasing, electrifying music and sadistic murders in Neighbouring Sounds. Yet the film is at times excruciating to watch: the violence and the corruption here are much more subtle, yet no less powerful. They slow their ugly face in events so banal in Brazil that they hardly cause any commotion: a car radio being stolen, a juvenile delinquent forced down a tree and beaten up by the local security staff.

The lives of these neighbours is seem extremely tedious and banal. The camera is largely static, lighting is mostly natural and there are very few face close-ups, giving the film a Brechtian feel. The indoors scenes take place almost exclusively in the barren and soulless apartments in a high-rise condominium. Such dwellings are conspicuous in every large Brazilian city.

In Neighbouring Sounds, the middle-class apartments are pearl-white, luminous, spacious and dotted with sparse furniture. Yet they do not feel free and liberating, instead they feel oppressive. Perhaps that’s because the streets in most Brazilian cities can be dangerous and intimidating, and so the middle class often spends most of their time cloistered in their bleak white temples. Brazil often locks its citizens inside, away from the undeclared civil war that kills more than 40,000 people every year. 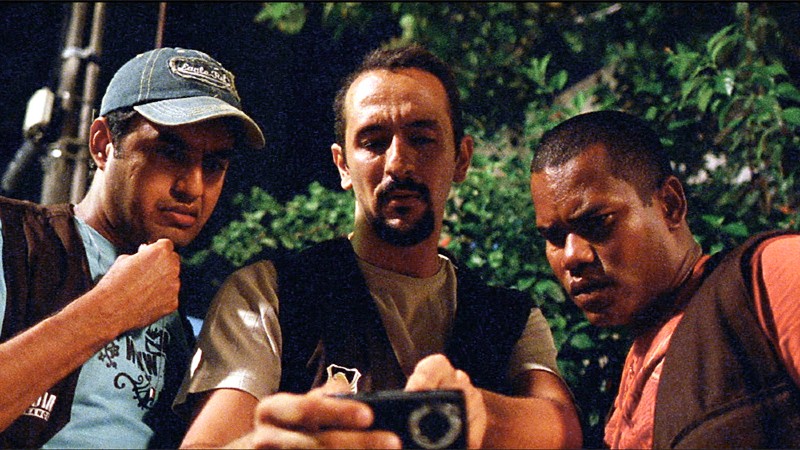 It is indoors that the most secret and peculiar acts take place: Bia (Maeve JInkings) masturbates to the vibration of the washing machine and vacuums the smoke from a spliff while she smokes it; João (Gustavo Jahn) has sex with his latest catch Sofia (Irma Brown), and they run around the house naked.

There is an invisible barrier that make these apartments sacred and impenetrable. Despite being so oppressive, somehow they feel larger than the outside, and – most importantly – private. This is why Bia poisons with drugs and vexes the neighbour’s dog with an dog-whistle device. The barking broke the invisible barrier and invaded Bia’s temple, an urban blasphemy.

The interaction between the neighbours themselves and also with their security staff is awkward, monotonous and disconcerting. Even the most private acts are devoid of passion and verve: João’s aftermath of sex, Bia’s children massaging her back on the sofa to the sound of Brazilian music, or birthday of a small girl. In Neighbouring Sounds intimacy looks forged and unnatural and yet engrossing in a dark and morbid way.

Despite the Brechtian devices and apparent anhedonia of the characters, the film is profoundly accurate and recognisable to most Brazilians. It is also a very beautiful film for those who can see beauty in the most unlikely of places: an old man facing the sea in his underwear at night, the look of estrangement a little girl as people sing a creepy version of the Happy Birthday song, the motion-sensitive outdoors floodlights going on and off as people walk past, and so on.

Most Brazilians have encountered similar people in a similar a environment, and many even live in such places. It is very easy to relate to the awkward banality of Neighbouring Sounds, which might explain why it’s so uncomfortable to watch. American painter John Currin once said that he paints people we all knew but wish we didn’t in everyday situations, from cooking to love-making. Mendonça Filho has achieved a very similar result in Neighbouring Sounds, a film that skillfully reclaims the allure of banal living.

Neighbouring Sounds received many international accolades, including the Audience Award, the Golden Kikito and the Critic’s Prize at the Gramado Film Festival (in Brazil). It is available in DVD and streaming in most countries in the world. French magazine Cahiers du Cinéma has listed Mendonça Filho’s upcoming film Aquarius amongst the most eagerly awaited movies of 2016, alongside Almodóvar’s and Clint Eastwood’s latest endeavours. So stay tuned!

This film was selected as one of the 16 dirtiest Brazilian films of the past 10 years. It’s available on MUBI for 30 days only in March 2020,